Buccaneers at Vikings: This game features two groups of sexy outlaws: the dirty swashbucklers from Tampa Bay vs. the handsome Nordic raiders of Minnesota. Gosh, who to pick? Simon wouldn’t mind being boarded by the Bucs… but he wouldn’t mind being ravaged by Vikings, either! Oh my! In the end (hehehe!) Simon thinks that handsome Adrian Peterson will run all over those dirty pirates from Tampa Bay. Take Minnesota for the win!

Panthers at Chicago: Simon just can’t be bothered with politics, so instead of watching the debate last night he watched the Bears’ defense totally shut down the Lions’ offense. Now ya’ll know I love me some Cam Newton (and some Steve Smith and some Jonathan Stewart and some DeAngelo Williams!), but Simon just doesn’t think my hometown kitties have the mojo to beat the Bears, who seem to be clicking at just the right time. Simon says to take Chicago to make Carolina look like a Division III team!

Chargers at Browns: Phillips Rivers looks like a giant doofus. And one could argue that Norv Turner doesn’t deserve to be a head coach in the NFL. But I don’t think they’ll have any problems taking out the hapless Browns this week. Sure, the Browns are probably better than their 1-6 record would indicate… and oftentimes it’s the teams with nothing to lose that you have to worry about. But honey, San Diego will dominate this game! This one is a lock!

Seahawks at Lions: Getting back to that Monday Night game: Are the Bears just that good? Or are the Lions just that overrated? Simon loves him some Matthew Stafford, and he especially loves Calvin Johnson (Heeeeyyy Megatron!!!). But the Lions’ dynamic duo just looked lost last night! I know they’re playing at home this week, and I know they’ll want to redeem themselves. But I think that sexy Russell Wilson and that chocolate Adonis Marshawn Lynch will run rampant (haha! Heraldry humor!) over the Lions this week. Take Seattle to win, girls!

Jaguars at Packers: When the Aztecs dedicated the great temple at Tenochtitlán, they offered a massive human sacrifice to appease the gods. This game won’t be on that scale, but there will be human sacrifice indeed. The neither sexy nor hunky Blaine Gabbert will be in waaaayyy over his head… assuming he plays at all. And if Chad Henne is your starting quarterback, there’s just no way he can beat the Pack. Especially since Maurice Jones-Drew is out. Take Green Bay to win!

Colts at Titans: I know that cute lil’ Andrew Luck has been looking good lately (when is he not looking good, am I right, ladies?). And I’m almost inclined to pick the Colts to snag a win here. But I think in the end Big Schmoe Matt Hasselbeck will be able to pull out a win for Tennessee this week!

Patriots at Rams: Tom Terrific and the evil Emperor Palpatine have looked almost human this season, no? He heart just went out to Tom when they lost to Arizona, Bawlmer and Seattle, and Simon was on the edge of his seat as they barely beat Dirty Sanchez and Toe Sucker last week. But you know what Tom’s last name is? Terrific! He’ll bounce back this week – and look fabulous doing it, by the way – against the Rams. Oh sure, the Rams are much better than their 3-4 record… maybe just a play or two away from being 5-2. But Tom and Wes and Rob will bring the Handsome Train to town and shut them down. Take New England to win big, ladies!

Dolphins at Jets: Ya’ll know I’m not a fan of the Jets. Yeah, that Tim Tebow is kinda cute, and the sports media mens need to leave him alone (you just keep Tebowing, little man!). But I think they’ll win this one. The real mystery for Simon is… how did that Ryan Tannehill get such a pretty wife? I mean, in most pictures I’ve seen, Tannehill looks like he’s about to go Full Metal Jacket on everyone, right? Life’s odd sometimes. Take New York to win this one, in spite of Rex Ryan.

Falcons at Eagles: Oh my! The Diiirrrrrtttty Biiiiirds are 6-0! And Simon’s pretty sure that they’ll be 7-0 after Sunday! Sure, the Eagles are like a wounded animal, unpredictably thrashing out. But there’s just too much turmoil going on in Philly. That AWFUL Michael Vick isn’t the same QB the Eagles thought he was, and Atlanta’s D will feast on them all game long! Take Atlanta to win this one!

Redskins at Steelers: Of course, if I want wet food from my daddy, I have to pick the Steelers. But they looked pretty good in the Sunday night game. Although the boys from Steel Town only beat Cincy by a touchdown (24-17), the game wasn’t nearly as close as the score would indicate. Had the Steelers receivers not dropped so many balls, it might have been 42-17 Pittsburgh. And if Big Ben hadn’t fumbled on his own 8 yard line, maybe Cincy doesn’t get that second TD and the Steelers win 42-13. Most importantly, the Steelers D actually looked like the Steelers D you remember (if I’m not mistaken, the Bungles offense racked up 28 whole yards in the second half!). Now my up-and-coming sexy man RG3 might make things tough for the Steelers, but they’re playing at home (always hard to win at Heinz Field) and if the D can repeat their Sunday performance, I say Pittsburgh wins. And although I love me some Mike Wallace, he’d better drop to his knees and beg for the contract the Steelers initially offered him. Then he should take that money and buy some Stick ’em from the Chargers!

Chiefs at Raiders: It’s Simon’s nap game! I doubt we’ll get this one on TV… but if we do, you know I’ll be sleeping through it… much like the Chiefs! Ya’ll know I joke about Kansas City – who wouldn’t? – but come on… those people deserve so much better than what they’re getting! Take Oakland to win this one, but not by much!

Giants at Cowboys: On one hand, Simon agrees with his daddy that they should call it the “NFC Least”. But on the other hand, he can’t help but get excited about seeing the G-Men clash with the Cowgirls! Or maybe it’s just ‘cos I’ll get to see Victor Cruz shakin’ them hips? I don’t know, girl, but I’m gonna take New York to win this one. I mean, Dallas struggled to beat the hometown Panthers last week, and they’re awful!

Saints at Broncos: Oooooo! That handsome Drew Brees taking on The Forehead? Sign me up, girl! I think these teams are pretty equally matched as far as talent goes, and it seems like the Aints have shaken off their early-season stupor. Simon thinks this game comes down to the home crowd, which in this case is Denver. But if neither team jumps out to an early lead, this one will get interesting!

49ers at Cardinals: You know Simon is pulling for San Francisco in this game, that handsome Larry Fitzgerald notwithstanding. Hey Larry… you should stop by my place for some MANmosas or Bloody Marys sometime! Simon will be waiting for yooooouuuu!!
Hope ya’ll enjoy the picks! See ya’ll next week! 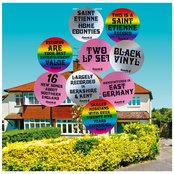 Out of My Mind
Saint Etienne
59 mins

In My Blood
The Veronicas
1 hour